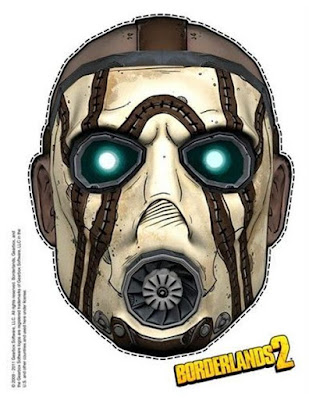 Borderlands, the Handsome Collection
If you haven't played any of the Borderlands games yet, and you have a PC, you should check out Epic's current free game, Borderlands, the Handsome Collection. The collection collects Borderlands 2, Borderlands the PreSequel (which includes events that presage the story in Borderlands 2, but came out between Borderlands 2 and 3), and all DLC content.
Yes, it's the second installment in the saga of dystopian irreverence and ribaldry that is the Borderlands series, but it's a good jumping on point. The first two Borderlands games are among the few that I've played all the way through, and - with two and three - among the even more rare game that I buy as close to launch as possible. The series has been praised as the first of the first-person looter-shooters, combining the appeal of Halo and Gears of War with the unique loot options and gear mining of Diablo and MMORPGs, it's not hyperbolic to say Borderlands launched a genre, paving the way for the likes of Destiny and Warframe. But it's the story and humor (at least for me) that make the Borderlands games a must-play.
Borderlands 2 does two big things for the series; it really drives home the role that the worlds-spanning mega-corporations play in the universe of Borderlands and it begins fleshing out the importance of sirens in the mythos. The intersection of those two really is the story of Handsome Jack, the eponymous villain of the collection.
To say too much more risks spoilers, but if you've played the games before, you understand. And if you haven't, you will after you claim and play your free game. And don't skip the DLC, especially the Tiny Tina content.
The game is available to claim and download for free through June, 4, when Epic will add a new free game to their store.

PS+
If you have PlayStation Plus, and you haven't claimed your free PS4 games yet, you better get it done this weekend. That is, if you want Farming Simulator 19 and the community building sim Cities: Skylines. The May offerings have been widely panned by all but the most dedicated sim enthusiasts, but we get a peak at what June is going to offer with early access to Call of Duty WWII, also available now. There were various rumors of the other possible June offerings, but it looks like the next game we'll see added is Star Wars: Battlefront II, available after June 1.

Xbox Live Games with Gold
If you pay for Xbox's Games with Gold service you've got two more days to claim racing game V-Rally 4 and tactical RPG Overlord II. The future fantasy RPG Warhammer 40,000 Inquisitor-Martyr will remain available through mid-June. Xbox is pushing consumers, including those who already have an investment in the old Games with Gold model, towards their new Xbox Game Pass system, which grants access to stream several different titles across console and PC - similar to the PlayStation Now offerings - but for now Games with Gold hasn't been abandoned.

Humble Bundle
Neither PlayStation Plus nor Games with Gold offerings are technically free. You have to pay for the services which then grant you access to these games. Humble Bundle doesn't have any truly free offerings this week, but there are a few that might as well be with the low price you can pay for access. At the $1 level, Humble's Namco Bandai Bundle includes Pac Man 256, Get Even, and Enslaved: Odyssey to the West premium edition. Any of those individual games are worth $1, but Enslaved is one I can heartily endorse. The futuristic retelling of the Chinese literary classic Journey to the West was a fun ride on console, and is worth picking up if you haven't had the pleasure. The ultimate edition also includes some new skins for Trip and Monkey as well as the DLC expansion Piggy's Perfect 10.
Beating the average (currently just north of $11) grants you access to remasters of two classics of past console generations. The first time I played any of the .hack games was on PlayStation 2, and they gave me an idea of what MMORPGs were like before I'd had the chance - or decent enough internet - to play my first real MMO. (I fed so many pigs. So many pigs.) The middle tier includes a remastered edition of the second set of games in the series, .hack//G.U. This remastered edition, .hack//G.U. Last Recode, includes the original three chapters in the story, Rebirth, Reminisce, and Redemption, as well as a new chapter four, Reconnection.
Another remastered PS2 classic, now available on PC, Katamari Damacy REROLL, is also offered at this tier along with the 3D action rogue-like RAD. If you want to go all in at the $15 level, you can also get the fighter TEKKEN 7 and sail the seas with pirates in Tales of Berseria.
Even if you only support at the $1 level, you can get access to some decent games. It isn't free, but it's a heck of a good deal. You've got three more days to pick these titles up before the deal ends. (And, if the Cities: Skylines sim from the PS4 section above intrigue you, but you don't have PS+ or prefer to play on PC, Humble also has a Cities: Skylines bundle available for the next 10 days.)
Borderlands charity classic games free games Humble Bundle PlayStation remasters