May 04, 2020
(Originally published in edited form in October, 2017 in the  Ashland Daily Independent) 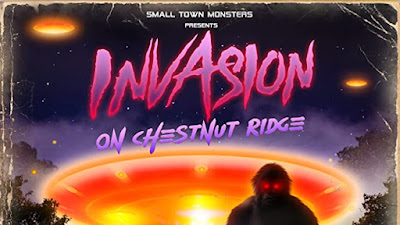 On the evening of December 9, 1965 witnesses across the Midwest – from Windsor, Ontario to Kecksburg, Pennsylvania – reported spotting a bright reddish orange orb zoom through the night sky. Kecksburg, a small town along Chestnut Ridge in the Appalachian Mountains, was where it finally came to rest, crashing along the area now known as Meteor Road.
A meteor is all it was, if you believe the official reports. But the people of Kecksburg say it was something entirely different. If reports from the small community are to be believed, it was the sight of Appalachia's own Roswell-type event, complete with the crash of an acorn-shaped unidentified flying object and a military response and cover-up.
If the events of December 1965 were the only odd thing to happen on Chestnut Ridge, it would still be an interesting story. But according to the folks who live there, the area of Chestnut Ridge, which stretches across Pennsylvania and into neighboring West Virginia, has long been home to a wide variety of strange and unexplainable events. Folks who study such strange phenomenon would call it a “window area” – a place where the oddities of other worlds peek through into our own. Oddities that strain the credulity of even the most ardent “believers.” But whether you believe them, or not, the stories keep coming. Tales of Bigfoot, strange subterranean sounds, big birds, black panthers, werewolf-like dogmen, winged humanoids, will o' the wisps, and even a dragon.
These are the stories that Seth Breedlove and the crew at Small Town Monsters explore in their fifth feature, Invasion on Chestnut Ridge. Releasing hot on the heels of the studio's other celebration of high-strangeness, The Mothman of Point Pleasant, their new film celebrates the direct-to-video, B-movie, horror aesthetic while still taking a comprehensive look at the history of odd occurrences in the region.
“It was about two months of figuring out how I was going to tie it all together,” Breedlove said of the broad variety of reports.
Even with the variety of reports, he explained, he and his crew still “barely scratched the surface of the reports.”
“Seriously,” he said, “at one point I found myself erasing a section of the narration that was about reported sightings of giant, translucent caterpillars. I thought that was pushing what a general audience could handle.”
Not only were some of the stories he heard completely fantastical, he explained, but if he were to include every story he heard, the film could have become bloated.
“I just never know how long I can safely make these movies with people (losing interest.) I try to do what's right for the story, but I also try to be mindful of what non-crypto people are willing to sit through.”
Invasion of Chestnut Ridge is an undeniable treat for those with an interest in the Fortean, paranormal, or cryptozoological, but it's also designed to appeal to those who just want a good real-world story to get them in the mood for Halloween – the folks who might not be students of the strange and esoteric, but still have an interest in visiting haunted train tunnels or spooky covered bridges.
The B-movie effect helps cultivate that feeling of being alone on a stretch of remote, dark road and wondering what creepy things could be just around the next curve. Scary, but also fun. Especially considering the oddity of some of the stories featured, like a 1973 report of Bigfoot type creatures seen alongside a UFO.
“I wanted it to be a little kitschy, but not cheesy,” Breedlove said. “Like, not being disrespectful to the witnesses, but still having some fun with the reports.”
The camera work and pacing achieve that balance nicely, with some of the quick cuts adding to the sense of anxiety.
“Our approach to this one was pretty much the opposite of Mothman (of Point Pleasant),” Breedlove explained. “That was really locked down, and long shots. I think the average cut on that was four to five seconds. This was one and a half to two (seconds.)”
Breedlove also said that one of the things he was trying to achieve was that sense of being both scared and fascinated by the paranormal as a child.
“Invasion on Chestnut Ridge was, stylistically, heavily influenced by my fear of Unsolved Mysteries as a kid,” he said in a Facebook post about the film, explaining how it differs from the approach he plans for his next film, on West Virginia's famous Flatwoods Monster, which he expects to borrow heavily from the alien invasion movies of the 1950s and 60s.
If you've watched the other films in Small Town Monsters catalog, you know that the camera work and editing have gotten progressively better, while the stories have remained tight and engaging. Invasion on Chestnut Ridge is no different. The film, which releases on DVD and streaming services October 20, is the perfect accompaniment to the Halloween season, and a must watch for anyone with an interest in the strange and unexplained, or those who just enjoy a good creepy story.
This Halloween, as you're trying to decide what to do, let me suggest getting together a group of friends, popping up some popcorn, and sitting down to a screening of Invasion on Chestnut Ridge. Then, load up in your car, find a dark stretch of rural road, and go for a drive. But keep your eyes peeled. You never know what you might see around that next bend.
For more information on this, and Breedlove's other films, check out Small Town Monsters online at http://www.smalltownmonsters.com or on Facebook https://www.facebook.com/smltownmonsters/.
at