Tactical role playing games (TRPGs) are an interesting genre. Usually aimed at the “hard core” gamer demographic, at higher levels and harder settings they can require chess-like planning, forethought, and troop coordination. Resource management, party makeup, and terrain advantages can all play into a successful campaign, or lead to a crushing defeat. It's the kind of game that appeals to those who love to crunch numbers and consider strategy. These aren't the types of games where you go in swinging a sword and screaming “Leroy Jenkins!” You have to think about how a fight could play out, and set it up in advance so that it plays out to your advantage.
Sometimes, though, you just want to see a story play out and focus on group dynamics. If you want to go that route – maybe before you come back and challenge yourself on a more difficult setting – Broken Lines, a new TRPG from developer PortaPlay and publisher Super.com set in an alternate reality WWII, puts a special focus on story and relationships, with an accessible story and pause-and-play game play that takes some of the typical “hardcore” requirements out of the genre.
Don't misunderstand – Broken Lines still provides a challenge, one that can be scaled up or down from the difficulty tab in the settings menu, depending on your preference. But it's a nice accessible introduction to the genre for those who might not have played a lot of TRPGs in the past. Or a nice reintroduction for those who tried them out and found them either lacking in the story department, or just too difficult to advance and enjoy the story.
Some of the first TRPGs to enter American homes were on the original Nintendo Entertainment 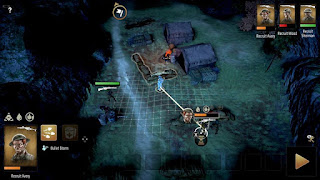 System (NES), so it's only fitting that in addition to releasing on PC, Broken Lines is also available on Nintendo Switch. There is a reason that the home PC has become the preferred platform for a lot of TRPGs though. The kind of coordinated troop movements that a player has to think about to successfully execute a plan can be much easier to set-up and initiate in a point and click environment. Often, while working on my first attempted play-through on the Switch, I found myself wishing for a keyboard and mouse and cursing myself for not taking the early offering of a Steam key instead of waiting for the Switch key. When I came back to the game, even though I hadn't beaten it yet, I decided to start over again from the beginning. That second attempted play-through went much smoother. And though I didn't quite finish the first couple of scenarios in the time I would have liked, my kill stats were much better. It took some getting used to, but once I had the controls set in memory, the gameplay was smooth and, dare I say, fast-paced. The pop-up tutorials are very helpful as you are working your way through those first levels, but if you don't feel you need them you can always turn them off in the settings menu.
If you're looking for a WWII experience, one where group dynamics and troop morale is just as important as an enigmatic enemy, Broken Lines is worth checking out. It should be equally fun for TRPG stalwarts who are looking for something outside the standard medieval swordplay and fantasy settings that tend to define the genre, but that can still offer a gameplay and tactical challenge. There's a few places where the game could stand some polish, to be sure, but overall it is a fun, challenging – and pretty – gameplay experience. You can download Broken Lines for the Nintendo Switch, through that console's eShop, or for PC through Steam or GOG.com. For more information and links to online shops check out brokenlinesgame.com.