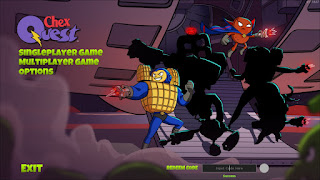 Back in 1996 I was 21-years-old. I made a lot of questionable decisions that year. It's the privilege of youth, to make questionable decisions. One of mine may or may not have been to buy a box of cereal to get a videogame-cum-advertisement that featured a man dressed like a woven rice cereal, giving Doom the E for Everyone treatment through four or five levels.

And yes, children, you had to buy the box of cereal. Not because there was a code inside. No. We had the internet, but it wasn't the internet we have today. It was the internet where you needed to use a landline telephone to connect. It was the internet that, if you picked up that telephone line while someone was online, it sounded like two demon possessed robots having an argument about where to eat dinner. And your sister couldn't get phone calls if you were online, so "you can't tie up the phone all night!" It was the 90s. So you had to buy the cereal to get the disc inside to play the game.

The CD-Rom even came with America Online software – so you could get on the screaming robot internet if you weren't already. But there was no multiplayer. No, the internet wasn't built for that yet. (You had LAN parties. Ask your grandparents, young'uns.) And you could run it from DOS if you still weren't quite ready for that new-fangled Windows yet.

Fast forward 24 years and, well, I still make questionable decisions, especially as it concerns snack foods. So, here I am in the convenience store the other day, picking up a soda pop and trying to decide on my chip choice when I spot a bag of Chex Mix. Nostalgic for the worchestershire flavored mom-made mix of my youth, I grab a bag and only when I get to the car do I notice, I have a code on the bag. A code for... Chex Quest?!? 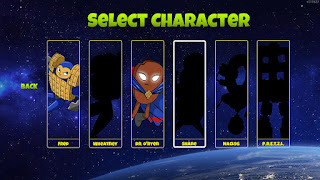 Yup. Chex Quest is back. Remastered and reimagined. With online multiplayer! Only this time you don't get a CD-Rom in your breakfast cereal. You download it free from Steam, and then you use the code on your bag of Chex Mix to unlock new characters. The same protagonist from the original game is back, and unlocked immediately on download of the game. But with codes, like the one on the back of my bag of savory Chex Mix, you can unlock other characters from the Chex Mix Squad. Mine earned me Dr. O' Ryen – the rye bread crisp. (I have to admit, these flavorless teeth breakers are my least favorite part of the Chex Mix, and up until now, I thought it was some kind of weird bagel crisp.)

The new characters and the multiplayer are nice touches, but beyond that, it's still just a re-skin of Doom. But, hey, it's a free re-skin of Doom. It's not scary for the kids, and allows them to "send enemies back to their home dimension" rather than killing them.

For those that have never played the games before, let me recommend using the keyboard keys and mouse to navigate. Maybe that's just me being old, but I think it's easier to navigate with mouse and keyboard than it is with a controller. If you have a Steam controller and want to use it, it will work. But you may still want to use your keyboard for some things, like pressing "E" at the keypads to open doors. There's a controller button press that does the same, but it was easier for me to just use a hybrid combination of controller and keyboard. I felt like my Steam controller made me more responsive in fights than the mouse alone could have, but otherwise I liked maneuvering with the mouse and WASD keys. But play around and decide what works best for you if you decide to play and haven't before. If you have played Doom or other FPS games based on the Unreal engine before, you probably already know what works for you.

The Epic Game Store has their new free games too. The current two free games, Tacoma and Next Up Hero, expire on Thursday, so get them today if you haven't already. Beginning July 30, you can pick up three new games for free. The Mega Man inspired "rogue like and action platformer" 20XX , the fantasy rogue like Barony, which features online co-op play, and the retro action/adventure game Superbrothers: Sword & Sworcery.

So, if you're looking for something new to do, and want to save your cash, you got some free options. I'm not responsible if you find yourself craving cereal snack mix while you play, though.

This, and other Late to the Game(s) articles and reviews can also be found in the pages of the Carter County Times newspaper and online at cartercountytimes.com. If you'd like to run Late to the Game(s) in your publication, please e-mail for syndication options.
co-op Epic Games free games Mac online play PC retro games Steam