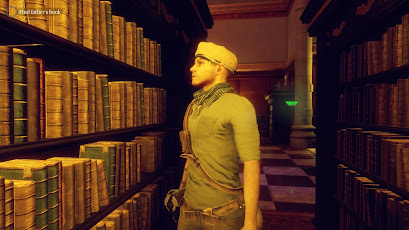 Sometimes it seems like it's difficult to impossible to find a game that you can find compelling for you, as an adult, and that you don't mind having your kids watch you play, or allowing them to play. I mean, sure, there are the classic platformers for Nintendo featuring a well-known pair of Italian plumber brothers, and the adventures of a certain blue track-star hedgehog who zips around like he's had one too many espresso shots. The Lego games are good for some family couch co-op – and the ones based on popular film franchises give you a fun take on those stories. But even those games have some elements of violence, be it smashing sentient mushrooms underfoot or – literally – knocking the block off a Lego enemy.
Sure, there are puzzle games and rhythm games and racing games, but if you want something with a bit of a story line, they're even worse than the E rated platformers.
So, what if I told you there was a game that could appeal to fans of franchises like Uncharted and Tomb Raider, but without the protagonists engaging in a single gun fight? No sneaky back stabbing. No fist fights. Just exploration, logic puzzles, and an engaging story. Crazy talk? Maybe. But there's a game behind it too. Adam's Venture: Origins is an indie game initially released for PC and modern gaming platforms back in 2016, by Dutch game developer Vertigo. There was another promotional push of the game last year, which is when I first picked up my code for PS4. But the game actually goes back a little further. Originally released in episodic form, the game had mixed to poor reviews when it launched it's first episode back in 2009. The long release time between episodes probably didn't help much either. But with the Origins remaster, Vertigo has created a game worth playing.
First off, the graphics are much improved. It's still not AAA quality, but it looks good. Stop and look at the art hanging on the walls in the games opening area. Pay attention to the lighting. This remaster took pains to make sure things look better. But, even though graphics are important – no one wants to go back to PS1 era Lara Croft – it's the gameplay that keeps Adam's Venture intriguing. Each section of the story is based around some puzzle that the player, as Adam, must solve to help his father's research organization beat the evil Clairvaux Company to the discovery of the Garden of Eden. Using his grappling hook gun to swing across and over various obstacles, and rewiring everything from automobiles to radios to film projectors in order to uncover clues along the way, Adam takes players on a daring adventure through the roaring '20s that smacks of Indiana Jones, minus the Nazis.
Now that we're in the year 2020, it's interesting to look back 100 years and see the differences between what was "modern" then and what we take for granted today. But that's the kind of deep dive only history nerds and video game geeks (of which I am both) care about. What most of you care about is spending some time on the couch playing a fun game, and having something that is age appropriate for your children. Adam's Venture: Origins presses both those buttons. Available digitally on PS4, Xbox One, Nintendo Switch, and PC for less than $20, give it a look if you're interested in something a little different in your next game choice. I think you, and your kids, will find it worth your time.
This, and other Late to the Game(s) articles and reviews can also be found in the pages of the Carter County Times newspaper and online at cartercountytimes.com. If you'd like to run Late to the Game(s) in your publication, please e-mail for syndication options.
Nintendo PC PlayStation remasters Steam Switch Xbox