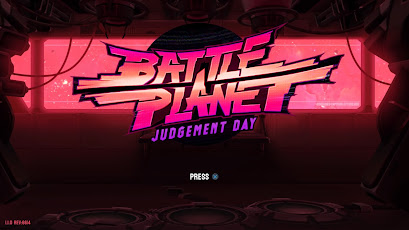 Sometimes you want a deep story in a video game. Sometimes you want a challenging puzzle. And sometimes, well, sometimes you just want to shoot things and watch them blow up. If that's what you're looking for Battle Planet – Judgement Day – a twin stick shooter, top down, rogue-lite – delivers in spades. The game isn't hard to grasp, but it does take time to master. Different game modes require the player to wipe out all the enemies on the screen, fend off enemies while defusing bombs before they can blow up a significant portion of the plant, or to beat bosses at the end of a planet level. Along the way you pick up various power-ups and weapon mods that can help you stay ahead of enemies or wipe them out in large swathes of death and destruction. The level-end boss fights, which pit you against various types of new and unique enemies while also fighting off the continuing waves of the typical troops and wildlife you encounter throughout the game, are also how you unlock new player characters. The first you'll unlock fairly quickly. The next will be a bit more of a challenge.

Once you've unlocked your characters you can modify them to fit your play style. Points earned playing each planetary level, which really resemble small asteroids or planetoids more than a full blown planet, can be used to customize your characters weapon load-out and skills. These upgrades enable you to tweak the characters to your individual play style, but really, Battle Planet – Judgement Day isn't that complex of a game. You use one stick to move around and one stick to point your guns at enemies. That isn't to say the game isn't fun. It's arcade style play can be addictive, and before you know it what feels like minutes spent saving planet after planet proves to be hours of play.

You can also play together, in PvP or co-op mode, so it's the kind of thing that you and a significant other or a parent and child can sit down and enjoy on a weekend without worrying too much about story or progression. It's a fun little time waster, but one that rewards repeat game play through the upgrade system, and challenges the return player with ever progressing difficulty.

Battle Planet – Judgement Day, from developer Threaks and publisher Wild River, is rated "T" for Teen and available on Steam for PC, Nintendo Switch, and PS4 for $14.99, and well worth every penny.

Share your thoughts on the game with us, in the comments below, or email me at jeremy@latetothegames.com.

This, and other Late to the Game(s) articles and reviews can also be found in the pages of the Carter County Times newspaper and online at cartercountytimes.com. If you'd like to run Late to the Game(s) in your publication, please e-mail for syndication options.