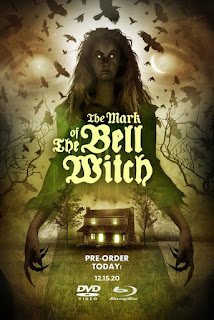 The Small Town Monsters films are all treats. Director, writer and producer Seth Breedlove has made some spectacular films on a wide range of topics, from Bigfoot (The Minerva Monster, Beast of Whitehall) to Mothman (The Mothman of Point Pleasant, the Mothman Legacy) to crashed and recovered UFOs (Invasion on Chestnut Ridge, the Flatwoods Monster) to werewolves (The Bray Road Beast). Along the way we’ve been able to watch Breedlove grow as not only a filmmaker, but as a storyteller as well, experimenting with different cinematic techniques and styles. In Momo the Missouri Monster, for instance, he worked at creating a less documentary style, casting longtime collaborator and narrator Lyle Blackburn as the fictional host of a late night B-movie monster series presenting the dramatized story of the Momo phenomenon, to entertaining but mixed effect.

With his most recent Kickstarter project, featuring the recently released Mothman Legacy and the soon-to-be-released Mark of the Bell Witch, he’s back in the mode of pure documentary filmmaker. But the lessons learned from those forays into other styles are on full display, especially in Mark of the Bell Witch. The film – one of the more comprehensive documentary treatments of the topic – uses a gorgeous mix of black-and-white dramatization footage and animation, along with commentary from local historians, folklorists, and Adams, Tennessee locals, to tell a compelling story that is both informative and creepy at the same time.

I found myself caught by a jump-scare at one point, bolting a little in my chair, something that was both unexpected and delightful.

For those unfamiliar with the Bell Witch story... (read more here)