Joan (not her real name) claims that something weird is happening on her property near Big Bone in northern Kentucky. The fifty-nine-year-old witness says that, for the last two years, she has been seeing lights in the sky around her home, which borders Big Bone Lick State Park, and she isn't alone. Her husband, nephew, niece, and a neighbor have all seen them too, and they have photos to back up their sightings.

It all started with her neighbor. She lives alone, with a large dog, and during the summer of 2016 the dog began going berserk at night. He would bark loudly at something in the dark, but when her neighbor would look out, she saw nothing. A university was conducting digs in the nearby state park, Joan explained, and at first her neighbor thought it might be their activity riling up the dog. To make sure, however, that no one was trespassing on her land, she set up trail cameras on her front porch. That was how she first captured images of the orbs.

The images were inconclusive, and didn't show anything other than a large red circle of light in the upper right-hand corner of the shot. Looking at them, it could have been someone standing close to the camera, with a flashlight held just in the frame. But something about the photos scared Joan. They reminded her of something she had seen before and, as it turns out, something she would see again.

It was the autumn of 1974 when Joan had her first sighting of a UFO. It was football season, and she and her late first husband, Mike, were supposed to be at a football game. Instead they were parked along Cody Road in Florence. The sixteen-year-old Joan was just dating Mike at the time, and when a light shined into their vehicle from a field across the railroad tracks, she thought they had been caught parking by the landowner. What she saw, though, was much scarier than a farmer's tractor. Moving across the sky overhead, she said, was what she described as “the mother ship.”

“It was as big as a football field,” she said.

The light shined on them for a moment, she said, and then moved away. She went home and told her mother about it, swearing that she hadn't been drinking, and then put it out of her mind for the rest of her adult life. She said that she did ask Mike one time, before he passed away, if he ever told anyone about the sighting. He told her that he had not, because no one would have believed him if he had. 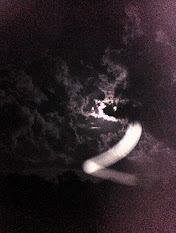 Joan thought that was it. This, she thought, would be her one instance of experiencing the unknown. She grew up, moved to her current home, and went about her life. She didn't think much of the 1974 experience until 2016, when her neighbor came to her with the photos. It wouldn't be long before Joan began seeing the lights for herself. It was the summer of 2017, she said, when she began to see strange lights. Something in the sky, she said, was shining and changing colors, strobing from red to green to orange, and it wasn't just her seeing them. Her husband and nephew were seeing them too. They even observed them through binoculars, as they changed colors while dancing over the treetops.

She would eventually find out that her niece was seeing them too. While working around the barn with her horses in the evening the young girl had been seeing unexplained lights in the sky, which she assumed at first to be helicopters. But Joan would eventually see something that would remove all doubt that what they were experiencing was anything that could be explained away so easily. Joan saw a saucer. 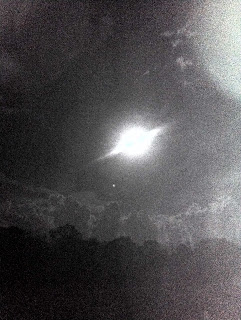 Toward the end of January, just before reaching out to the media and discussing her sightings with me, Joan said, she thought she saw a saucer. She caught a glimpse of it out of the corner of her eye, but couldn't find it when she looked. Then, when she looked away, she caught a glimpse of it again, going back the other way. After that, she said, about a week before speaking with me, which would have been around January 24, she saw the saucer clearly.

“I saw it last week,” she said. “A silver saucer, with three windows.”

Since then she, her husband and her nephew have been watching for them. Her nephew, she said, has been especially intent as he turns his attention to the evening sky. That was how they captured the photos that they shared with the Journal-Times. He's also seen several in the direction of a power plant that is near the family home, leaving Joan to wonder if the lights are associated with or attracted to the activity there. 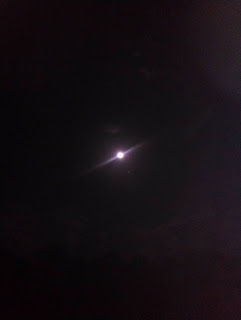 While the trail camera photos are inconclusive, they do back up her neighbor's story about seeing a glow around a post in her field and a “big light” in the yard. Other photos shared with the newspaper could also be something else, either flashlights held just out of frame or lens flare on photographs of the moon. But some of them are harder to explain away. At least one seems to show some motion blur, as a glowing object moves quickly across the frame, doubling back on its own path before zooming away. Another shows what could be the saucer shaped object Joan and her family described, with an intense glowing light around it.

It's impossible to say for sure just what it is the family and their neighbor have captured on their cameras, but Joan knows what it is not. It is not an airplane, she said. Nor is it a helicopter, as her niece at first believed. The family sees those regularly, and they know what they are. Whatever it is that they are seeing is something they haven't seen before, she said, and something that scares Joan for reasons she can't quite explain.

Note: Neither the reporter nor the Journal-Times make any judgments as to the veracity of the information provided. We are simply sharing the photos and stories that were shared with us. The name of the witness has been withheld to safeguard her privacy and the privacy of her neighbors and family.

(This story was originally published in the February 7, 2018 issues of the now defunct Grayson Journal-Enquirer and Olive Hill Times. For more information contact the writer at jeremy@latetothegames.com.) 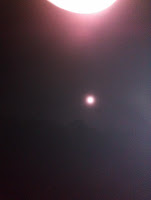 Joan was back in contact with us in late March/early April of 2019, this time with video from her neighbor's porch. The lights appear to be possible reflections, maybe from spider web as one viewer noted. But whatever the source, it doesn't seem that Joan had any intent to deceive. If she did, she could have edited the video to a shorter length, to make it appear that what we are seeing is distant lights, high in the sky. Instead she leaves the video exactly as is, with the "lights" appearing very small and very close to the camera, coming down into the yard and gravel driveway. As with the photos Joan shared the year before, I make no claims to the veracity of the video or to Joan's claims. I only share with you what was shared with me.
Appalachia Close Encounter Fortean Kentucky UFO Window Area